Insulin mimetics and the management of blood glucose

Over the years we have seen how carbohydrates have been exalted and demonised, having then rediscovered their proper position of importance.

The real problem lies in being able/knowing how to optimise their function. But in order to reach their "destination" of use, they must be effectively transported to that destination in particular which "interests us", therefore muscular, and not end up converted and stored as fat.

Recently we have seen how the inflammatory potential of a diet with excess glucose (hyperglycaemia) and a corresponding state of hyperinsulinaemia, not only creates an "aesthetic" issue, but it can also develop into diseases such as diabetes and other serious risk factors.

When we consume carbohydrates, the sugar levels in the blood rise significantly and, if they are simple or refined, this happens in an even more intense manner. As a result the pancreas will be required to produce insulin in order to transfer the sugars from the blood to the cells.

If this vehicle transports them directly to the muscle, for example, the bodybuilder, or indeed anyone who wants to optimise their diet, would reach their ideal result.

But unfortunately, this process does not always work effectively (for various reasons) and in addition to the muscle cells, excess or poorly processed carbohydrates often go on to develop into fat tissue.

We are therefore talking about insulin resistance, which indicates resistance to the action of insulin by the cells.

Sugars and other nutrients contained in what we eat are normally absorbed through the intestine and enter the bloodstream.

Increased glucose levels in the blood (glycaemia) "warn" the pancreas that it needs to increase its production of insulin which acts like a "key" to the body's cells to let the glucose enter, so that this can be used as fuel for the production of energy and does not turn into fat.

When you have insulin resistance, the body's cells do not respond to insulin and their ability to let the glucose enter is reduced.

To compensate this defect, the pancreas will produce a greater amount of insulin in an attempt to "break the lock" to the cells to let the glucose enter.

In fact, people with insulin resistance have higher levels of insulin in their blood than what is considered normal.

Even if, at the beginning, the pancreas' effort can compensate for the resistance of the cells to insulin, in the long run even the increase in insulin levels cannot solve the problem, leading to the development of metabolic syndrome with all its complications and risks that can potentially become type 2 diabetes and other disorders. 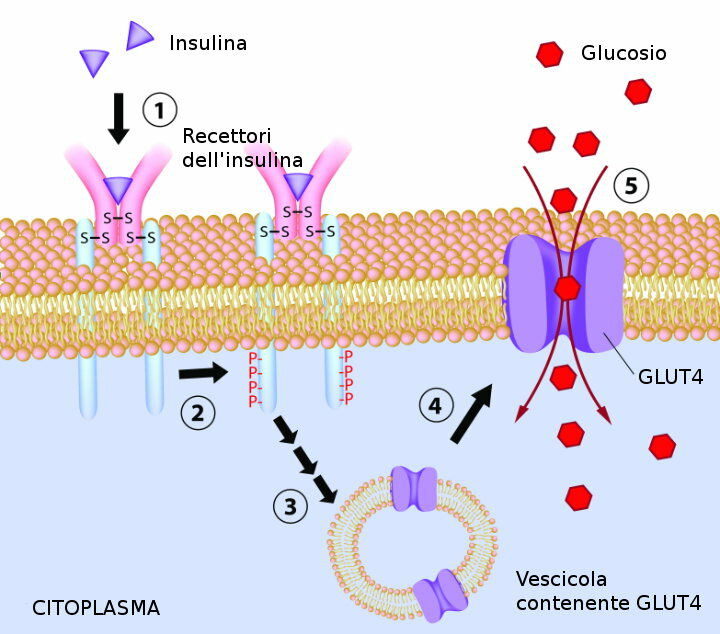 The effect of insulin on glucose absorption

The role of insulin mimetics

From running the risk of having to rely on hypoglycaemic drugs or worse, insulin therapy, insulin mimetics were created for preventive purposes, carrying out a management of blood glucose role.

These of course find an area of use, both for those who want to protect and assist, along with adequate nutrition, to counteract certain risk factors, as well as for those chasing an ideal state of pure aesthetic form, like bodybuilders, who are looking for maximum efficiency of use and storage of carbohydrates, seeking to accumulate the least fat possible.

Insulin mimetics (also known as "glucose disposal agents") can therefore only find a positive space in the battle arsenal to obtain lean muscle mass and/or to reduce the percentage of fat.

The better processed the carbohydrates that you ingest, the better the insulin management. Thus we promote an activated anabolic and favourable metabolic, to favour a more effective thermogenesis.

An idyllic situation for each goal of any diet.

To this purpose, let's get back the protagonist of this discussion: insulin, one of the most powerful anabolic hormones in the body. Insulin guides the glucose and amino acids in the cells, causing a strong stimulus to the protein synthesis and promoting the anabolic state of the cell.

That is why it must be promoted and managed, but sometimes also "helped" (with some very useful specific supplements) like a valuable "friend": that is, with maximum respect.

How do I use insulin mimetics and which ones do I choose?

The current landscape has given us several interesting supplements on the market, catering to the many demands on behalf of type 2 diabetics, people "at risk", as well as many people who are looking for increased metabolic health and to look better in the mirror.

The chemical structure of lipoic acid

This powerful antioxidant acts against the notorious free radicals, acting on the biochemical processes in which the rate of glucose in the blood reacts spontaneously with proteins, such as collagen, and destroys them.

These processes are nurtured by poor eating habits (excess of simple sugars or fats, especially trans-fats) which over time lead to an acceleration of ageing tissue, kidney damage, atherosclerosis and loss of vision (extreme and late complications of diabetes mellitus).

How does it act on blood sugar? Slowing the formation of this protein-sugar link by increasing the assimilation of blood sugar into the cells, a task normally carried out by insulin (hence the term "insulin mimetics"), limiting what could be a potentially excessive increase in blood sugar.

But after these scientific and medical applications, let's see how it should be used by those who "simply" want to optimise their performance or fitness.

As I said, we can find it added to a large number of supplements due to its remarkable properties (antioxidant and liver detoxifier in particular), which provide general health to the whole body.

In the sports sector, it prevents the decrease of glutathione-transferase activity induced by physical exercise, protecting muscle from oxidative damage by counteracting the lipid peroxidation of membranes.

There are formulations from 200-300 mg per capsule on the market and 2-3 doses at a time are usually recommended, preferably combined with meals including carbohydrates. These include the delicate post-training meals where the best insulin action is carried out on muscle cells to provide the best support for a rapid and efficient transformation into muscle and liver glycogen. 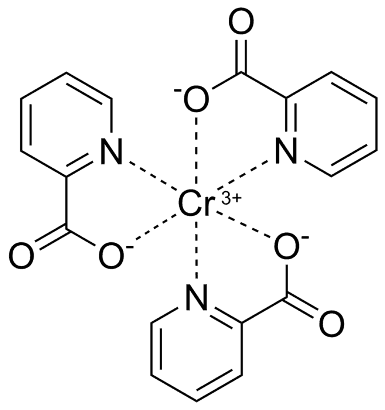 The chemical structure of chromium picolinate

Chromium, on the supplements market for some time, is a micronutrient present in trace amounts in our bodies with the role of cofactor in enhancing insulin function.

Although the exact mechanism of action is not yet well known, it was no accident that I spoke of "locks and doors", because this micronutrient helps open the cell's door to promote insulin, activating the tyrosine-kinase enzyme, which binds to its membrane receptors, facilitating the entrance of carbohydrates and amino acids.

It is a fact that a chronic deficiency in chromium decreases the body's sensitivity to insulin.

The recommended dosages are between 200-500 mcg of chromium (picolinate version) combined with meals including carbohydrates. In reality, a daily "recommended" intake of chromium does not exist for the Italian population, even though we have known about and used the substance for quite some time. 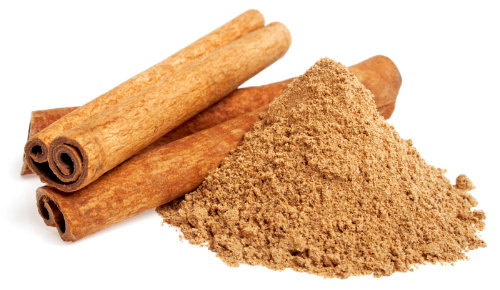 Very fashionable recently and carefully included in many recipes, cinnamon is a powerful spice for glycaemic control.

Just consider the fact that it manages to improve glucose metabolism in fat cells twentyfold.

Everyone is familiar with this spice thanks to its unmistakable aroma and its common use in sweet recipes. It was traditionally used to support digestion and dysbiosis, however a recently discovery uncovered its ability to intervene in the control of blood glucose, encouraging greater sensitivity to insulin, as well as the input and use of glucose by the cells.

Cinnamon bark been repeatedly studied for its hypoglycaemic properties (i.e. its ability to lower blood glucose levels) in animal and human subjects.

In particular, its mechanism of action on glucose levels was attributed to a protective mechanism on the pancreatic beta cell against oxidative damage and its systemic insulin sensitising effects.

A 2003 study attests to its effectiveness on men with type 2 diabetes, resulting in a reduction of basal glycaemia (18-20%) and triglycerides (23-30%) compared to a placebo (Khan et al. Cinnamon improves glucose and lipids of people with type 2 diabetes. Diabetes Care 26 (12), 32158, 2003).
A 2009 study tested an acceptable cinnamon dose (1 g per day) over a period of 3 months on the basis of a stable and reliable parameter (glycosylated haemoglobin and non-fasting blood glucose).

The patients in the study were all treated with oral hypoglycaemic agents.

The intake of cinnamon in the indicated doses, shows a distinct advantage over the single drug administration and in the absence of side effects (Crawford. Effectiveness of cinnamon for lowering hemoglobin A1C in patients with type 2 diabetes: a randomized, controlled trial. J Am Board Farm Med. 2009; 22(5): 507?12).

The most recent discovery among the supplements is gymnema sylvestre.

Known since ancient times in Indian medicine, gymnema leaves contain a mixture of at least nine glycosidic acids with a very similar structure that carries out a hypoglycaemic effect through two main mechanisms:

The studies that I have read demonstrated that this active substance has a molecule similar to that of sugar, but it is more coarse which causes it to bind to the intestinal receptor, used for absorption, reversibly blocking it.

This block is quickly occurs and persists for many hours, especially if the doses are repeated throughout the day, preventing the absorption of sugar by 50%.
The plant also has another feature, an "anti-sweet" effect (perhaps the feature that makes it more "well-known").

By just putting a small amount of gymnema on your tongue, within a few moments you annul the perception of sweet and bitter (while leaving the perception of salty, sour and metallic tastes unchanged), thus decreasing cravings for sweet foods. Curious, isn't it?
Gymnema's ability to synthesise and facilitate the disposal of sugar also confers a "slimming" action, promoting weight loss for people who are overweight due to a diet that is rich in sugars, such as cakes, bread and pasta.
Usually sold as tablets or capsules of dry extract from 400-500mg, a double dose per day is recommended.

In conclusion, I believe that these four supplements are effective tools to be considered in any nutrition program, even if they do not create miracles.

Whether you are seeking a phase of slimming or muscle mass construction, the important factor is that glucose (and amino acids) preferably arrive in the muscle cell and not in the adipose tissue.

However, let me remind you that a proper diet is the factor that will always make a difference to your goal. However, if we can take something that encourages what we eat to be utilised extremely well, we will definitely enjoy increased metabolic health, as well as promoting the increased construction of muscle, a better performance and less fatty tissue.

Suggested articles
Why are saturated fats bad for you?
Cyclodextrins: the new frontier of carbohydrates
Energy gels for cycling and running