Cyclodextrins: the new frontier of carbohydrates

In the last ten years or so there have been many discoveries, including the emergence of myriad supplements specifically for "pre-workouts". Right now we are in the era of pre-workout products with a stimulating effect due to nitric oxide, which are very popular because of their marked effect on muscle pumping as well as focus (for those with stimulant substances).

Talking about products with clear usefulness that have met with my approval in recent years, I would definitely include high molecular weight carbohydrate among the "priorities" for sports supplements.

If I remember correctly, "Vitargo" appeared in 2002-2003. This is a carbohydrate with an articulated chain of glucose molecules derived from potato starch, and was immediately followed by the less expensive equivalent "Waxy maize" (derived from corn).

These glucose polymers with branched structures have unique characteristics that have put aside the "carbohydrate" par excellence, namely glucose, and gone on to strengthen its concept and effectiveness with increasingly improving carbohydrate-based drinks for training sessions.

But let's see what's behind all this, as well what is appearing over the horizon!

At present, there are still few companies (at least at the highest quality level) that have focused on this particular source, but the hype it is causing is truly interesting and well-founded.

A few years ago, I myself was quite intrigued to see two of my mentors support cyclodextrins during training in every situation, from the growth phase up to pre-contest stages.

Some big brand names followed, and on the US market, where they have been sold for some time now, they proved very successful because of their speed and their efficiency in terms of absorption and use. As they do not cause gastrointestinal disorders or dehydration problems, they also offer an option for those who couldn't tolerate other types of carbohydrates.

Why use intra-workout carbohydrates?

Let's take a much needed step back to clarify.

Why use liquid carbohydrates during a training session?

The patron of this theory in the world of body building was Milos Sarcev, who firmly believed in a mash up of carbohydrates, isolates, various amino acids and a number of other elements to be taken during a workout when muscle hyperaemia was much higher than physiological baseline levels. As such, it exploited the pump and the insulin rush to get to the active parts of the muscles, which need oxygenated blood and nutrients.

Developing Sarcev's old theory, various factors were optimised (and its foundational basis confirmed) which in turn led to the optimisation of the components of the drink, so that the absorption times and even the effectiveness were significantly improved. The typical disturbing effects caused by glucose were practically eliminated (especially in large quantities and/or if only slightly diluted).

And so it was.

Thanks to the glucose polymers, in combination with a dose of protein and amino acids, this encourages rapid gastric emptying and equally fast intestinal absorption of glucose, which is then quickly released in the stream of emotion.

In addition, we get a powerful combination contrasting with the catabolism generated in training, precisely because of the unique feature of low osmolarity, which offers great support for cell hydration (the hydrated cell is an anabolic cell) and does not cause dehydration due to boost of fluid in the stomach and intestines, with appreciable effects on recovery and adaptation. 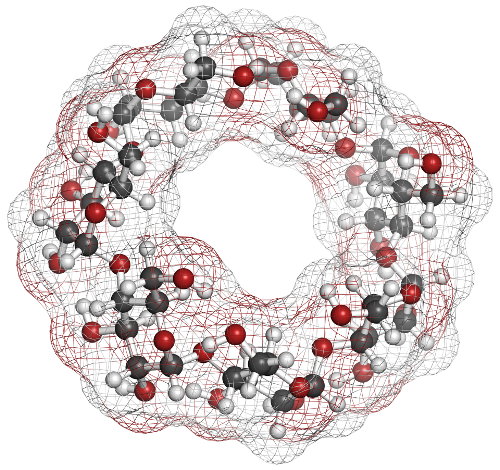 Objectors could still ask "but is this kind of carbohydrates so important and so much better than the old glucose/dextrose?"
Before clarifying this, it is crucial to explain the concept of "osmolarity", because we will be mentioning it a lot because of its current importance.

Osmolarity is a unit of measure widely used in chemistry when we refer to the concentrations of solutions, and it indicates the total number of molecules and ions present in one litre of a solution.

As such, the osmolarity of a solution increases along with the number of particles that it contains , and if a glucose-based beverage has a much greater osmolarity than its counterpart in terms of glucose polymers, such as Vitargo, what happens is that we will have a net gastric emptying speed by the latter in relation to glucose, which will boost the fluids in the stomach and intestinal lumen resulting in delayed emptying and absorption, encouraging dehydration during a performance and/or gastrointestinal disorders (diarrhoea).

Not only that, we can see the characteristic of "speed" as a more powerful glycemic and insulin response supporting glycogen synthesis.

That's not bad at all, and if we consider that the next creation of Waxy maize (amylopectin), a highly branched glucose polymer, clearly has a high molecular weight and low osmolality, we find that not only goes from the stomach quickly, but it also allows for the slow and gradual release of glucose in the blood, meaning it can also be used for endurance sports.

Another flaw found in the glucose-based drinks is the risk of unpleasant reactive hypoglycaemia during exercise if blood sugar is not well-managed with a constant intake of the drink.

The current state of the art in supplementation with carbohydrate-based drinks presented the amylopectin found in Waxy maize as its greatest pinnacle, as it had a highly branched molecule with a high molecular weight, which, as previously mentioned, gave us to very low osmolarity, and the additional characteristic of being able to support performance longer term.

Let's call it the ad hoc "carbohydrate"!
These strong points were used to develop highly-branched cyclodextrins (HBCD).
A few years ago I saw it included in the food programmes by some of my overseas mentors, so it aroused my curiosity and I began to search through the scientific literature to find out about their particular characteristics and how cyclodextrins could have a use in "food". Next some companies industry followed suit by formulating the products that still form the elite of carbohydrate supplementation.

HBCDs are new type of glucose polymers that are formulated by the reaction between waxy maize with a particular enzyme, forming a cyclic structure.
The result was a glucose polymer with ideal usage properties, for instance an average molecular weight of 160,000 Da with very low osmolarity and therefore fast gastric emptying.

One "small" detail is that glucose weighs about 180 Da..... It doesn't end here, because HBCDs are not only absorbed very quickly, they are released into the blood stream gradually (1.2).

These studies are not only interesting on paper.

Preliminary research on animals shows a significant improvement in performance as can be seen from chart from the study by Takii et al. 1999, where HBCDs are compared with glucose and just water.

The advantages of cyclodextrins

In particular there are two remarkable advantages in using these high molecular weight glucose polymers as an intra workout supplement:

First and foremost, glucose is rapidly but steadily released into the blood.

The speed at which they arrive at their "destination" is not only determined by their molecular weight, but also by their molecular structure which also determines how the enzymes can hydrolyze such a branched glucose polymer in free form in the intestine.

The second advantage of using a glucose polymer with a high molecular weight is in the low osmolarity of the solution.

Many of us (rightly) mix liquid carbohydrates with hydrolysed proteins, bcaa, essential amino acids pools, creatine, etc. and the last thing we want is a delay in the absorption of these "fast" proteins, amino acids or of the other added nutrients, which could happen when using carbohydrates with high osmolarity. As previously mentioned, this would slow down gastric emptying both of the carbohydrates and of the other nutrients that exploit the carrier of the mixture, before then reaching the intestine, boosting liquids and negatively affecting performance and muscle pump, with the risk of generating a tendency for gastrointestinal disorders.

In light of this, I believe that more and more attention will be given to these glucose polymers and their use will receive greater confirmation, to the point where they will become a real tool made available to foster recovery for athletes , with fewer limitations and the elimination of the problems caused by drinks based on simple carbohydrates, like good old glucose.