Enough with the seasonal ailments! These remedies help your defenses
Home / Wellness / The Expert's Word

Enough with the seasonal ailments! These remedies help your defenses

With the cold season we all have to deal with the spread of viruses and bacteria responsible for the classic colds that knock out adults and children. Let's see what the typical ailments of winter are due to and what are the arrows that nature puts on our bow to fight them. 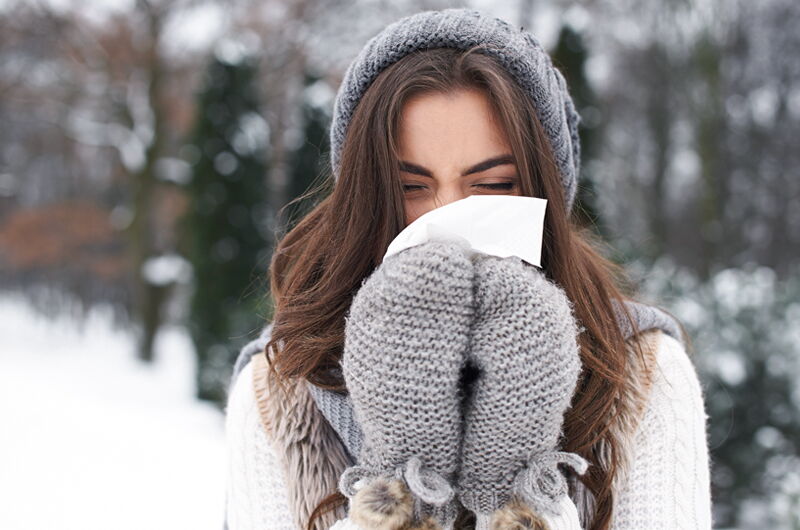 Why do we get sick so often in the winter?

To cause i seasonal illnesses it is mainly the sudden changes in temperature and the consequent tendency to group together in closed environments, to the detriment of the open air. In winter we not only have a greater tendency to get sick: our immune system can also tend to be weaker and less reactive due to various factors, including:

Acting in advance with the use of natural remedies with recognized beneficial strengthening activities for the immune system can help to avoid being infected by the flu, sore throat and respiratory tract diseases such as colds, coughs, bronchitis.

Nature provides us with phytotherapeutic remedies now widely recognized and validated also by modern scientific research for their role in strengthening the immune defenses, both as a weapon of prevention and of contrast, favoring a faster and more efficient healing. 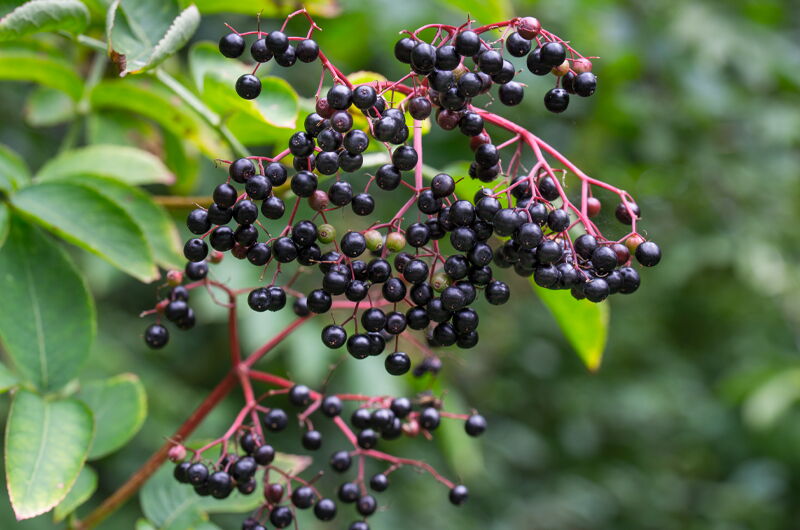 Among the most popular plant extracts, elderberry is traditionally used throughout Europe for its antibacterial and antiviral properties, the subject of scientific research that demonstrates its value as a support against seasonal flu.

Elderberry, thanks also to the abundant presence of bioflavonoids and antioxidants, has in fact phytotherapeutic qualities recognized as "active and effective" (DM Health 03/27/14) which help improve the fluidity of bronchial secretions, the functionality of the upper respiratory tract, support for the body's natural defenses. 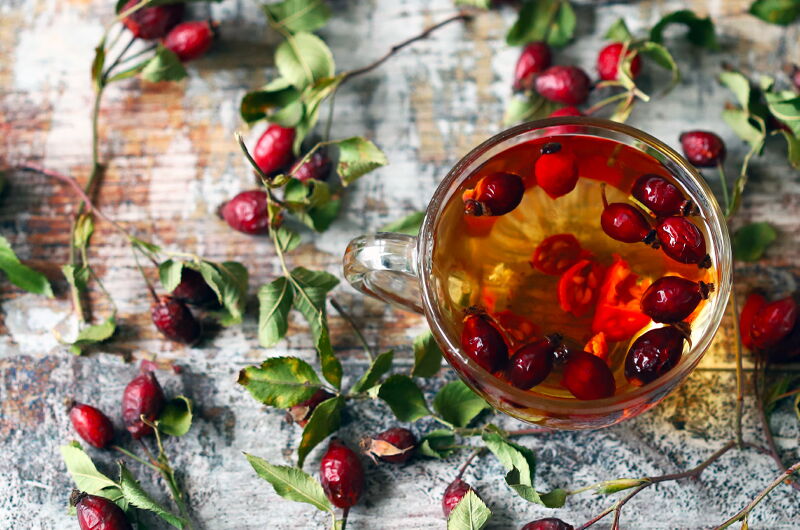 Dog rose is a thorny shrub belonging to the Rosaceae family, which grows wild throughout Italy and in many parts of Europe. Its therapeutic qualities have been known since the ancient Romans and throughout the Middle Ages. Rosehip is known for its very high concentration of vitamin C (100 grams of these berries have the same vitamin C content that a kilo of oranges!).

Rosehip berries contain other vitamins such as vitamins A, E, K and some of the B group. It is also rich in folic acid, valuable flavonoids, tannins, carotenoids and fatty acids (including oleic, palmitic, oleanolic, stearic and linoleic). Rosehip is also a good source of minerals, particularly iron, zinc, copper, calcium, manganese, boron, sodium, phosphorus, potassium and magnesium.

Very valuable is the synergy between vitamin C and flavonoids, which favor the absorption of the same vitamin.

Rosehip has anti-inflammatory properties, especially in case of problems in the respiratory system such as coughs and colds, but also pharyngitis and tonsillitis, helping to relieve the mucous membranes. This plant also assists the proper functioning of the immune system, strengthening and stimulating it both in preventing seasonal ailments, and in restoring health in the healing phase, avoiding relapses.

The anti-inflammatory action of rose hips also expands in the intestine, making it useful in case of diarrhea thanks to the astringent and antibiotic action of tannins. 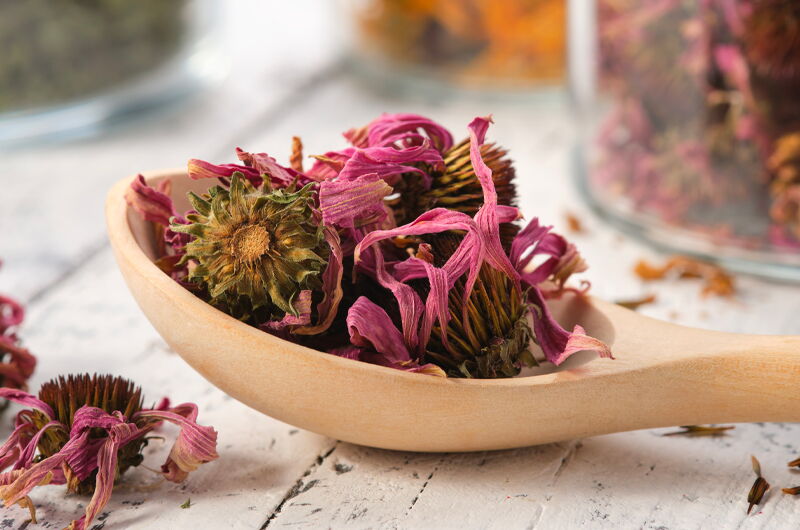 Among the most effective and used natural remedies there is certainly echinacea, a herbaceous plant of the Asteraceae family which includes nine species, all with medicinal characteristics: Echinacea purpurea and Echinacea pallida in the first place.

Native to North America, its use among the local native populations dates back to the Cheyenne tribe, who used chewed echinacea root to treat colds, decoction for joint and rheumatic problems and as an external application in case of fever.

Today, its immunostimulating, antiviral and antibacterial properties are recognized by modern medicine and its use is widespread among adults and children against colds, sore throats and various flu ailments making it - even at a preventive level - a shield against colds. The therapeutic qualities of echinacea derive from the density of active ingredients that stimulate the immune defenses, such as: flavonoids, caffeic acid derivatives such as chicoric acid, chlorogenic acid and echinacoside, polysaccharides, polyphenols, glycoproteins with immunostimulating activity; alkylamides, polyenes and essential oil.

It is easy to understand how echinacea can represent a real elixir for our immune defenses! 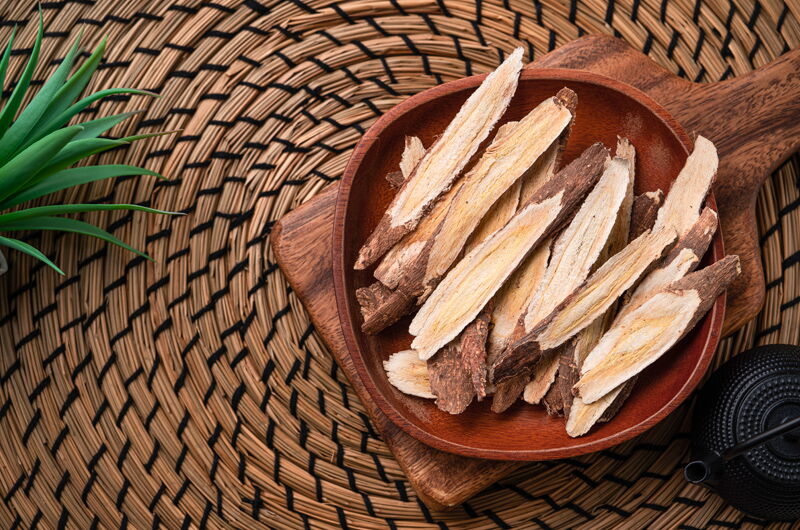 Astragalus is certainly one of the phytotherapeutic elements of the oriental tradition that has found more space and application among modern supplements that act on the immune system. Astragalus is a plant that belongs to legumes, native to northern China where, in traditional medicine, it has been used for millennia as a tonic to reduce weakness and increase resistance to disease.

Astragalus is now considered an excellent supplement for the immune system thanks to the wealth of powerful bioactive elements, mainly used in synergy with echinacea.