The brownie is a famous Stutunitense chocolate cake, cut into small squares and served alone or accompanied by ice cream.

A delicious dessert, which we will make in a vegan and healthier key. Sweet potatoes will be the protagonists of our chocolate brownie, a vegan dessert that does not contain animal products, and also suitable for those who do not tolerate lactose and do not consume dairy.

The brownie of sweet potatoes is low in sugar, contains a good number of fibers thanks to the presence of oats, sweet potatoes and coconut. It is made in a short time and is delicious even cold from the refrigerator.

Properties and characteristics of sweet or American potato

American potatoes are the key ingredient in this chocolate brownie. There are varieties of American potatoes with white, yellow or purple paste, but the most common one is certainly the orange variety. This color comes from the abundance of carotenoids that make it one of the richest vegetable sources of vitamin A.
The American potato is also called sweet potatoes, in fact, contains enzymes that are activated during cooking at moderate temperatures and act on the starch transforming it into maltose, a particularly sweet disaccharide (about a third compared to sucrose).

The properties of sweet potatoes are similar to those of common yellow potatoes, but American potatoes contain more polyphenols, but also more potassium, manganese magnesium and riboflavin.

Unlike potatoes, the carbohydrate content of sweet potatoes is slightly higher (17-20% compared to 15-16%), as well as to be higher is the fiber content. However, the starch content is lower, albeit slightly.

The sweet potato can be consumed together with the whole skin, and this guarantees a quantity of fiber more elavated.

However, to prepare sweet potato brownies, we suggest you to remove the outer skin so as to obtain a dessert with optimal consistency.

Let’s see step by step how to make a vegan brownie with simple and healthy ingredients such as sweet potatoes, chocolate and coconut cream and oatmeal. 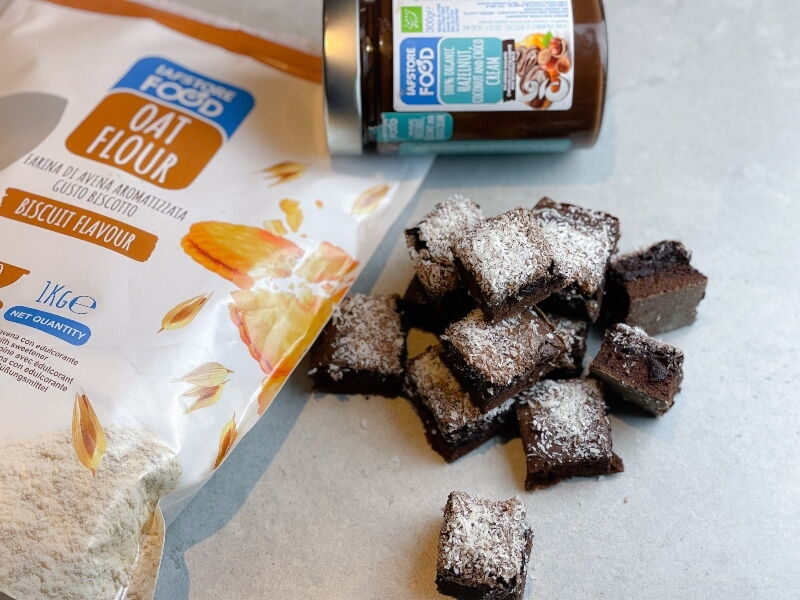 First boil the sweet potatoes or microwave at 900w for 10' in a special container.

Once ready, remove the peel and mash with a potato masher until they are pureed.

Now add all the ingredients and stir well. Alternatively you can use a blender and put the boiled potatoes with the rest of the ingredients, and blend until you get a thick and compact dough.

Line a baking sheet with baking paper (rectangular or square) and spread the dough on the entire surface.

Bake in a ventilated oven at 180 degrees for 10 minutes.

In the meantime, prepare the icing by adding all the ingredients to the liquid coconut oil. Let it rest in the refrigerator for 5-8 m.

Take out the brownie from the oven and pour over the sauce. At this point let cool at room temperature and then in the refrigerator for 2h.

Cut the brownie into cubes, sprinkle with coconut, and the snack is served!

They are kept in the refrigerator closed in an airtight container for 3 days.

We saw how easy it is to use sweet potatoes to make a chocolate and coconut brownie.

A light and healthy whim, low glycemic index and rich in fiber.