Creatine is part of the guanidino-phosphagen family, it is a non-protein amino acid compound naturally present in various foods, including mainly red meat and fish.

Most of the creatine is deposited in skeletal muscle (95%), the rest divided between the brain and testes. About 2/3 of intramuscular creatine occurs in the form of phospho-creatine (PCr), the rest as free creatine. It was identified for the first time in 1832 by the French chemist Chevreul but its presence in meat was confirmed by the well-known German chemist Von Liebig only in 1847, which was followed over the decades by numerous studies, which have not yet finished producing surprises, studies that saw among the protagonists the Italian school of Margaria. Naturally a portion of creatine, chemically "methylguanidinoacetic acid", can be synthesized in the liver, partly also in the kidneys and pancreas, starting from arginine, S-adenosyl-methionine and glycine,

It is therefore evident that la disponibilità di PCr è in grado di gestire i flussi energetici muscolari per gli sforzi intensi di breve durata, the availability of PCr basically depends on the activity of the creatine kinase (CK) enzyme, on the muscle stocks (and therefore on the total mass) and on the capacity for endogenous synthesis considering that the quantity that can be assimilated from food is extremely low. The primary role of Creatine, as well as its pleiotropic effect, is linked to the CK / Pcr system, schematically shown in Figure 2. 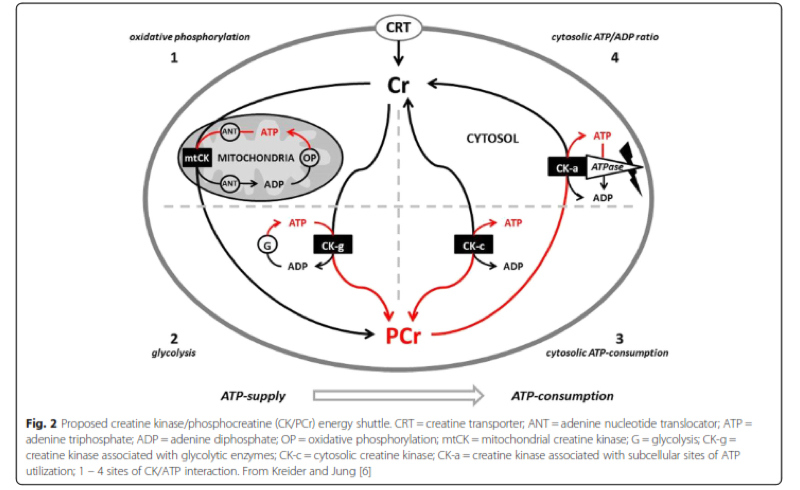 The amount of Cr used daily depends on various factors, the main ones being the duration and intensity of the exercise, the bioavailability of Cr sources , the muscle mass of the athlete, in fact it has been reported that large athletes are able to consume quantities of Cr equal to 5-10 g / day ; in some clinical conditions it can even reach 10-30 g / day (Braissant, Wyss et. All).

Per several years it has been hypothesized that increasing the amount of Cr ingested could lead to advantages caused by the greater availability and therefore an increase in the storage capacity of the same in the muscles, also given the demonstration that when the concentration of Cr decreases with the continuation of the exercise consequently the ability to maintain a constant intensity decreases. With a normal diet it is possible to supply 1-2 g of Cr per day which means saturating the deposits for 60-70%, clearly a supplementation would not only allow to saturate the deposits at 100% but even increase their capacity by 20. -40% also following various supplementation strategies (Candow, Kreider et all.)

Cr and its supplementation have been the subject for at least 25 years of at least a very long and copious series of studies that have led to understanding many aspects of the biochemistry of the substance and how it is able to accompany and modify metabolic adaptations that follow the exercises, often of very high intensity and load as well as of particular duration, without considering the very interesting prospects that are opening up in the clinical field but about which we will not write on this occasion.

The amount of Cr to be ingested to increase deposits is about 5 g / day for 5-7 days, we are talking about creatine monohydrate, the most studied form.

The quantities of Cr to be administered, able to keep the maximum amounts of muscle Cr constant, now see a decisive sharing, indicating 3-5 g / day even for long periods; s i consider a greater need for athletes of large tonnage for whom 5-10 g / day is recommended. In some studies it has been advised to start with a short loading period (in any case not less than 0.3 g / kg body weight for 4-5 days) followed by the previously recommended doses.

Administering Cr monohydrate together with carbohydrates or a mixture of carbohydrates and Protein increases the ability to retain and increase deposits (Steenge, Greenwood). Alternative protocol sees a quantity of 3 g / day for at least 28 consecutive days but the increase in deposits is slow and gradual. It should be noted that once the maximum amount of deposits has been obtained, in the event of termination of the supplementation, the return to the starting amount would take place after 4-6 weeks.

The creatine monohydrate , as mentioned previously the most widely used and studied form, is very stable in solid form , less in an aqueous solution in which however remains stable for several hours (the instability is manifested by cyclization to creatinine which would make little or nothing assimilable), the stability increases as the pH increases and the temperature of the solution decreases ; once ingested the absorption peak occurs after about 60 minutes.

In addition to Creatine Monohydrate, several other forms have been proposed (citrate, ethyl ester, nitrate, buffered and more) but none have been shown to have better properties both in the final result and in the absorption kinetics.

When to take it

As for the timing, on the other hand, several studies firmly state that taking Cr post-workout determines better results than the pre-workout by analyzing the values ​​of strength and body composition. 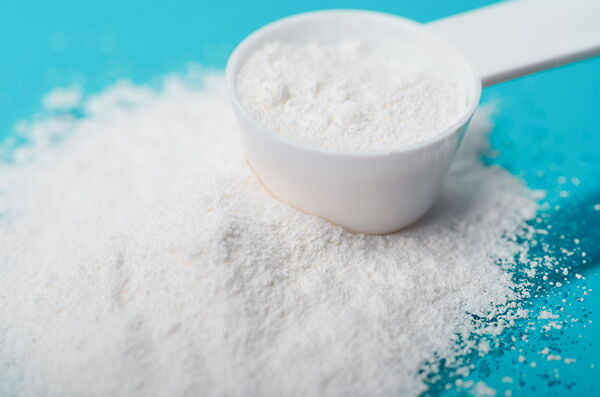 A copious series of studies has led to strong evidence in relation to the ability of Cr to provide an energy supplement in a large series of exercises; clearly different sports disciplines benefit from it in consideration of the presence of the different phases shown in the table that make up the characteristics of the discipline to be considered.

Below is a summary table that takes into account the sports disciplines that report an advantage from the supplementation of Cr and for what prevalent reason.

As can be seen, various disciplines are involved, confirming that Cr supplementation is able to increase performance in all athletic conditions, that is, both in pure strength and in high intensity, continuous and intermittent, as well as in long-term trials. 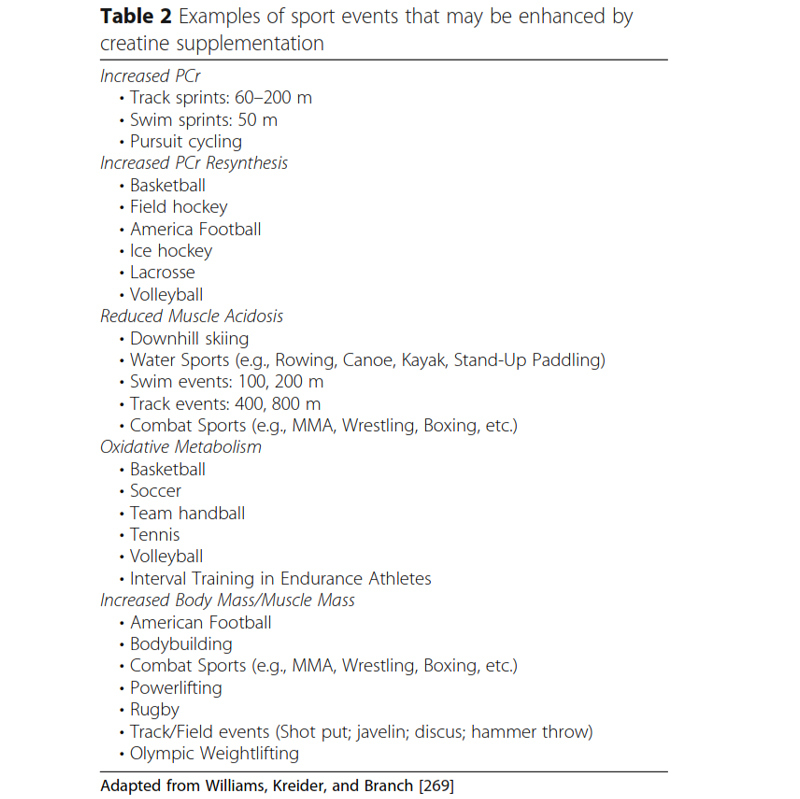 In a recent overview of the further advantages deriving from the use of Cr, a schematic description is given:

One of the most interesting aspects is related to the safety reported following massive doses of Cr taken for long periods without having particular side effects. In particular, it is reported that the daily intake for several years of dosages of 0.3-0.8 g per kg / body weight (equal to 21-56 g for a 70 kg subject) did not lead to clinical events or serious effects. collateral.

The considerable fame assumed by the capabilities of Cr has also led, as often happens, to the diffusion of both sensational elements of advantage, never confirmed in such proportions, and, on the contrary, alarming data relating to collateral effects capable, however, of compromising some characteristics salient points of specific disciplines, such as the worrying condition of weight gain following water retention obviously problematic in disciplines in which weight loss is decisive. To this end, it is necessary to report the definitive conclusions of a study that analyzed many scientific publications published on Cr supplementation, a very illuminating study in this regard:

In conclusion, Cr is increasingly establishing itself as a substance of considerable interest for the most varied aspects in the various sports disciplines, not excluding clinical aspects which, more and more frequently, go beyond sporting needs and for which, in any case, the scientific evidence is assuming. now unequivocal proportions.

Suggested articles
Creatine in sports: use, benefits and side effects
Your Complete Guide to Creatine Monohydrate
Creatine and Endurance | All the Positive Effects on Endurance Sports