The Virtues of the Hypericum
Home / Nutrition / Phytonutrients

The Virtues of the Hypericum

The scientific name of the hypericum is Hypericum perforatum but is commonly known as the herb of Saint John: it is a medicinal plant belonging to the family of the Clusiaceae.

It has aroused increasing interest over the years, for its antidepressant and antiviral properties.

The Benefits of Hypericum

People have been using Hypericum for centuries. Saint John’s Grass (Hypericum perforatum) is a flowering plant. Flowers are used to make liquid extracts, pills and tea. The popular herbal therapy is often used to relieve the symptoms of depression, particularly major depression.

A 2016 review of 35 studies concluded that Hypericum reduced the symptoms of mild to moderate depression, thus an impact comparable to multiple commercially available antidepressants.

A 2017 analysis of 27 studies noted that the percentage of people who take Hypericum and continue to take it chronically is higher than the consumption of antidepressants in chronic.

Another study indicated that Saint John’s Grass can be effective in treating wounds, bruises, burns and sores.
However, the Food and Drug Administration (FDA) did not approve the substance for depression or any other medical condition.

The FDA, in fact, classifies Iperico as a food supplement, not as a drug.

Jeremy Wolf, a licensed naturopathic doctor, explained that Hypericum has multiple effects on our bodies.
Wolf states that Hypericum: "It is a strong antidepressant and can elevate mood in individuals with mild to moderate depression".

The hypericum also has a strong antiviral activity that can also promote healing and wound repair. It is not a fast-acting cure. It may take weeks or months before you notice any effects. 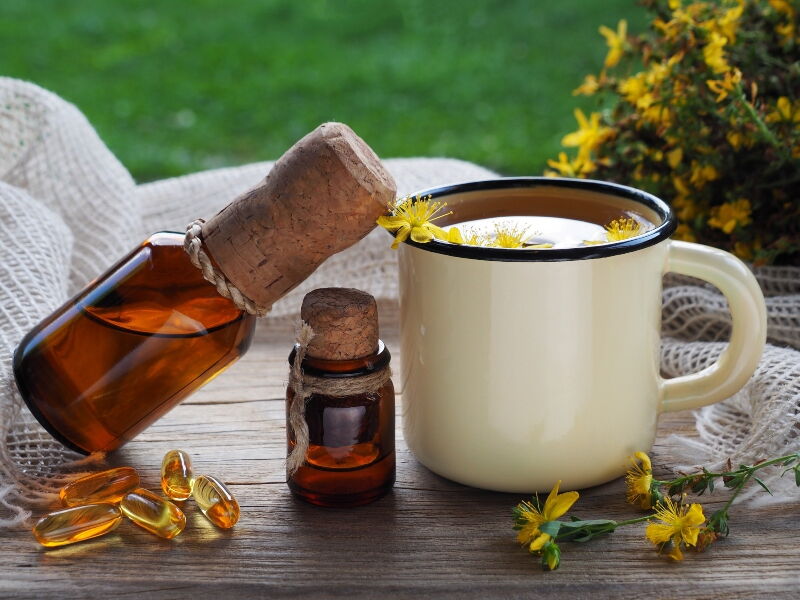 How much Saint John’s weed should you hire?

Blair Green Thielemier, Pharmd, told Healthline in 2015 that the dosage varies due to non-standard production. A normal dose range would be anywhere from 300 to 1200 mg a day. It is usually taken in split doses (300 mg three times a day or 600 mg two times a day). The effects of Saint John’s grass on the body are not entirely known. Some of the active ingredients of the supplement, including hypericin, hyperphorin and adiperforin, may be responsible for its medicinal benefits.

These ingredients seem to increase levels of chemical messengers in the brain, such as serotonin, dopamine and norepinephrine. The latter act to improve and/or regulate your mood.

The FDA regulations for food supplements are not the same as those for pharmaceutical products.

Unless there is a novel food ingredient, a company does not have to provide FDA officials with the evidence on which it relies to prove safety or efficacy before or after marketing its products.

The main concerns for Hypericum are focused on the metabolic pathway known as cytochrome 450.

This path consists of the enzymes that our body uses to eliminate the drugs and chemicals ingested from the bloodstream.

"These enzymes are responsible for the decomposition of everything, from the glass of wine you might have at dinner to a daily vitamin you take to keep your bones strong," said Thielemier.

So this could cause interference with the assimilation of other drugs, in particular it was noticed that Hypericum interferes with many common drugs, such as oral contraceptives, anti-epileptic drugs and anticoagulants.
It can also interfere with reflux and vomiting medications, heart medications, and certain medications used for heart disease, HIV, and cancer.

A 2011 study indicated that the supplement based on Iperico can reduce the effectiveness of Xanax.

We do not recommend the use of Iperico for pregnant women and breastfeeding women.

The grass of San Giovanni has also been studied for other conditions, including:

Wound healing: When applied to the skin, it has been discovered that it effectively treats bedsores, wounds, bruises, burns and haemorrhoids.

Menopause symptoms: a small study found a significant reduction in menopausal-related symptoms after taking a fluid extract of hypericum, compared to a placebo.

Seasonal Affective Disorder (SAD): SAD is a form of depression that occurs during the winter months. There is enough weak evidence to support the use of Saint John’s herb supplements in the treatment of SAD.

Cancer: Test tube studies have shown that hypericin in Saint John’s Grass can inhibit the growth of cancer cells. However, it is not recommended as a treatment for cancer due to its potential interaction with other cancer drugs.

In addition, some argue that it can be used to treat obsessive-compulsive disorder (OCD) and help people quit smoking.

The side effects of the two substances are similar.

They include vomiting, dizziness, anxiety, panic attacks, aggression and amnesia.

Suggested articles
Vanilla: an elixir of wellbeing and beauty